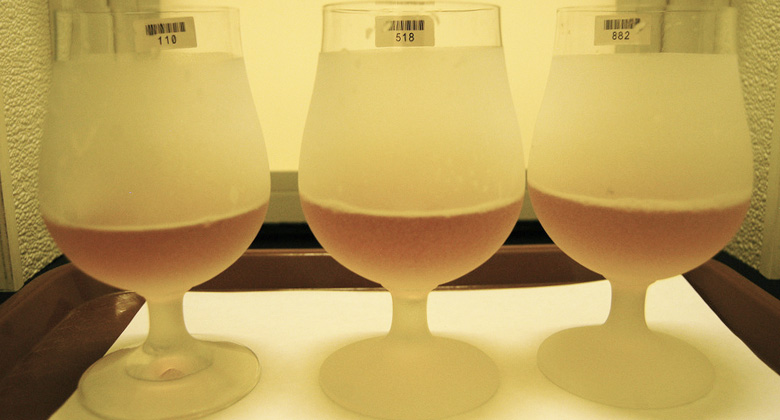 We don’t have a sophisticated laboratory (yet) so we regularly evaluate our beer using a formal method of sensory analysis known as a triangle test.

In this method, the evaluator is served 3 beers in unmarked, often opaque, cups and asked to pick which 1 of the 3 is not like the others.

When we first considered canning, we wanted to ensure it would provide an experience that was superior to our 22 oz bottle option. So we canned a dozen beers at a nearby brewery, and bottled those same beers, on the same day, from the same kegs. This helped ensure the liquid in both the bottles and cans began as similar as possible.

Each week, we sat down and did 3 flights: bottle vs can, bottle vs draft, can vs draft. Actually, after week 2, the draft beer was conspicuously superior in so many ways (proper carbonation, very little oxidative flaws) we determined it was no longer a useful reference point.

We know cans offer superior protection against light, but what we didn’t expect was how significantly the cans began to compare favorably to the bottle samples. Beer from the can had suffered fewer oxidative effects and had much better carbonation than the bottles.

After 5 weeks, the canned beer was still quite enjoyable, and clearly preferable in all our evaluations to the bottles. So we decided to get canning!