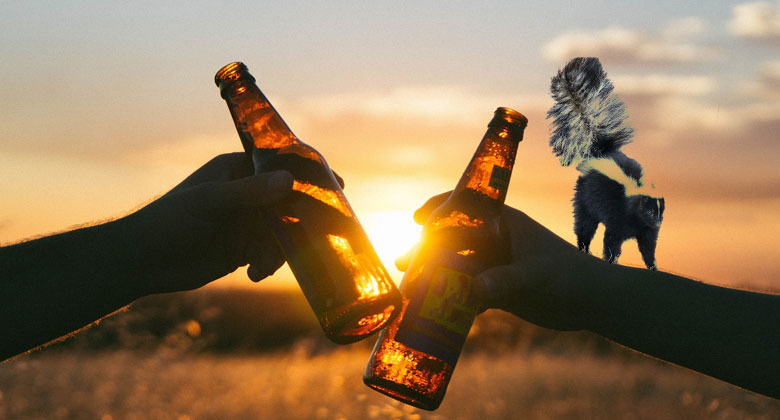 There is nothing quite like the warm glow of the sun setting in the late summer sky. The hum of the secadas, the crickets and at least near us the frogs will even join the sunset seranade. Ah, what a time to crack a nice cold beer and relax with friends. Only sniff, sniff yup. That tropical IPA aroma has been disrupted by the smell most people associate with the business end of a skunk – because it’s actually the same stuff!

How does Light Impact Beer

Nearly all beer contains hops, which are essentially flowers. Like all plants, hops have compounds that respond to light (we all remember photosynthesis from science class). Some of these light-sensitive compounds survive the brewing process and are rapidly transformed - by light - into a compound with a “skunky” aroma.

Why should you care?

This happens really, really fast and is aromatically detectable at very low levels. On a bright sunny day, beer in a clear glass will turn skunky within minutes.

What can you do about it…

If you don’t like drinking from a can, the ubiquitous red-solo cup will perform better than clear glass if you plan to imbibe outdoors!

The Science of Skunking

Hops contribute flavor, aroma, and bitterness to beer via the sticky oils / resins found in the glands of their flowers. These concentrated pockets of oil are called “lupulin” glands.

BONUS NERD NOTE: If you notice a striking resemblence to our name: Luppoleto that’s because lupulin and luppoleto share the same Latin root!

The oils contained in the lupulin glands are divided into two fractions: alpha and beta acids. This distinction is relavant to brewing in that the alpha acids contribute the bulk of the bittering compounds and the offending compound is the alpha-acid iso-humulone. So it is not just heavily dry-hopped IPAs which are vulnerable to skunking, it’s ALL beer.

In the prescence of light, iso-humulone breaks down and subsequently reacts with hydrogen sulfide (present in significant amounts as a yeast metabolite) to create Methyl-Butane-Thiol (MBT) commonly known as “mercaptan”. This is the odorific compound in skunk spray and also the stuff they add to the otherwise odorless propane to allow us humans to smell a leak! This molecule is perceptible in EXTREMELY low concentrations, as little as 1 part per billion! So it serves very well as a microscopic canary in the gas leak coal mine.

Other than LIGHT, beer has many enemies such as Time, Oxygen, and Heat.