Luppoleto: The Story Behind the Name 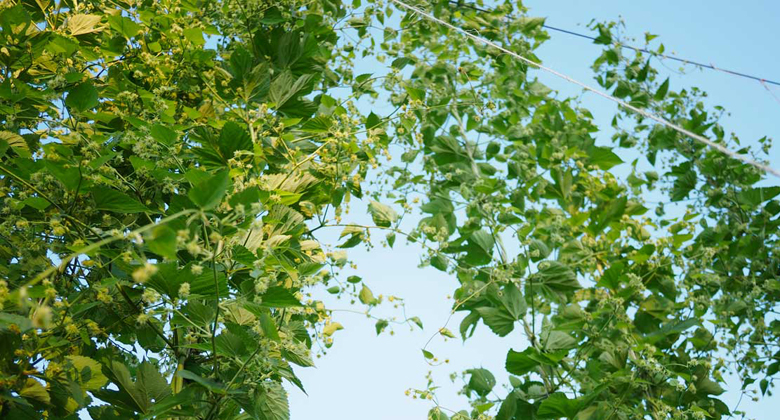 Luppoleto means hop farm or hopyard in Italian. It pays homage to James' Italian and agricultural heritage…and the craziness we both inherited that led James & Jen to plant 60 hop plants nearly ten years ago and set in motion a series of events that would lead to opening a brewery!

We agonized over the name. Especially James. He wanted it to be perfect. For a while, the front runner was Bailiwick; a reference to Jen’s maiden name and a term that loosely refers to one’s area of expertise. One might say brewing was James' Bailiwick. He quickly went to work securing domain names, social media accounts and even developing logo ideas before we discovered Bailiwick Wines and - at the advice of liquor industry friends - went back to the drawing board.

Then we went down the classic British Pub path. Old names like “Elephant & Castle”, “Fox & Hound” or “Three Crowns” were selected for preliterate patrons who relied on pictorial signs to recognize pubs. So we brainstormed “easy to draw” names and eventually landed on The Boxing Turtle. It sounded close to a real thing - box turtle - but was still unique enough to get on the first page of Google. We thought the turtle was a symbol of the slow food movement and would be a subtle akwnowledgement of our artisinal approach. (We thought wrong; the slow food symbol is actually a snail!) Nontheless, a boxing turtle is a striking and funny image. Again, domains were purchased, logo concepts were developed and then we realized…we don’t know anything about boxing! We don’t want to name everything with boxing puns and we’re not violent people. Back to the drawing board, again!

When we finally landed on Luppoleto it felt right for so many reasons, it encapsulated our story and James' brewing heritage beautifully.

He even looked American. At least to her. Blond hair and blue eyes were a rarity in their tiny Italian village and she took notice. He was building a new life in America and had returned to his childhood village to find a bride. She leapt at the opportunity. Three generations later, blond hair and blue eyes only further obscure my quarter-Italian heritage. The majority is Irish & English at this point but I still feel a deeper connection to that tiny Italian village. Perhaps it’s because I knew my Italian great-grandparents and heard their immigration story first hand. Or maybe it’s because I had the privilege of visiting that Italian village and meeting my relatives, many of whom still live in the same homes as they did when Noni & Papi left.

Although I didn’t fully digest it at age 16, I have come to appreciate my visit to Italy as one of the most impactful experiences of my life. When I decided to open my own place, I wanted to pay homage to my Italian heritage. Noni was one of the most welcoming, caring and generous people I’ve ever met. And nearly all of my Italian cousins extended the same hospitality during our visit. Beer may not be as celebrated there, but my great-grandparents who left behind the terraced vineyards for those amber waves of grain – they paved the way for this opportunity and so I honor that with the Italian name for hop farm: Luppoleto and I hope to honor their memory by showing the same gracious hospitality they always demonstrated.

My grandfather on the other side was a farmer. I only knew him as a salesman because it had grown difficult to “make a living on the farm” but they lived on the family farm; or the few remaining acres along Wright Street. The road was named for the farm and the farmers (my grandfather and great grandfather) who dug it with axes, horses and ploughs. While there were no longer animals or barns, the homestead and an ample vegetable garden offered evidence of their agricultural past.

My dad adopted his father’s love of growing vegetables and he passed that along to me. I even got a job working on a farm for a couple years before I realized just how grueling it is and how comfortable (and air conditioned) software development can be. Years later, like many of us immersed in a digital world of bits, I craved a connection to something real, something physical. This is what drew me to homebrewing.

There is something special about making a product that can be physically shared and enjoyed but, like gardening, the process is governed by natural laws. You prepare the environment for something to grow and then you are bound by its timeline. In the world of instant gratification this is a valuable zen-like practice. You can’t make it go faster without changing the outcome. Like fruits and vegetables, there was a natural cadence to the process, a natural ripening. It was not long before I decided to fully embrace my agricultural past and grow my own hops.

Growing hops may not seem noteworthy. Plenty of homebrewers plant a hop plant or two in their yard but my wife and I are not a normal homebrewers. We planted 60. We erected a trellis system – which the hops promptly outgrew, then built a new, larger system with 18 foot poles and aircraft cable. We put in untold hours weeding, picking and maintaining those hops. It turns out we aren’t quite cut out to be farmers but we both found it a welcome escape from staring at a computer screen.

This crazy idea wasn’t without its perks; The Wright Nano Hopyard didn’t lead to a side business or the cheap endless supply of brewing ingredients we imagined but it did earn James a trip to Sierra Nevada Beer Camp, an experience which cemented his future in the beer business.

The land where the Wright Nano Hopyard was born is up for sale so I moved some of the surviving plants to my father’s garden. The rest will come live at the brewery.