Thinking Outside the Glass 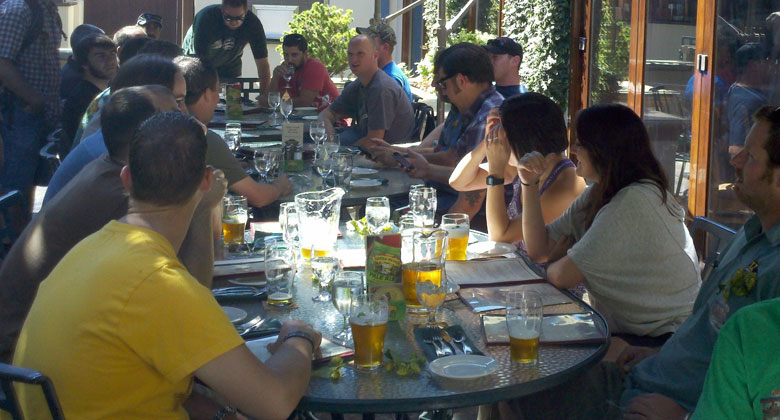 Someone needs to put beer in it’s place. I’m a sucker for a hoppy IPA or a roasty porter but lately those sneaky suds have been stealing the spotlight. It’s not about the hops or the barley. It’s not even about the water.

The most important ingredient in beer is outside the glass.

It is fitting that I came to this realization while sharing a few pints with the gracious, humble and sage Josh Bernstein. As our conversation diverged from our shared love of this lupulin laced liquor we stumbled into that wonderful world of conversation beyond beer. As the night wound down and we carefully traversed the snow-caked sidewalks of Burlington, VT enroute to the hotel; Josh waxed eloquent about how beer was just a starting point; a foamy ice-breaker that unlocked a myriad of topics.

Somewhat surprisingly, Dr. Charles Bamforth shares this modest view of beer as a trojan horse, an interchangeable pawn used as a vehicle for delivering knowledge. Charlie (as he prefers to be called) has a PhD in both biochemistry and applied biology. Yet he is accessible, humble, and hysterically funny - provided you enjoy the dry English wit. Along with Pasteur, Charlie belongs on the short list of scientists who changed the world of malting & brewing.

In his introspective book, Beer is Proof God Loves Us, he admits that his first love is teaching; beer just happened to be the subject. If you’ve ever had the privilege of attending a session with Charlie, it is apparent he loves to teach but it is difficult to fathom he is really ambivalent about the subject of his life’s work. But time has a way of separating the important from the trivial.

I suspect Charlie would agree that who’s on the barstool next to you is more important than what’s in your glass. Beer is just an introduction, the real magic is in the conversation that follows.