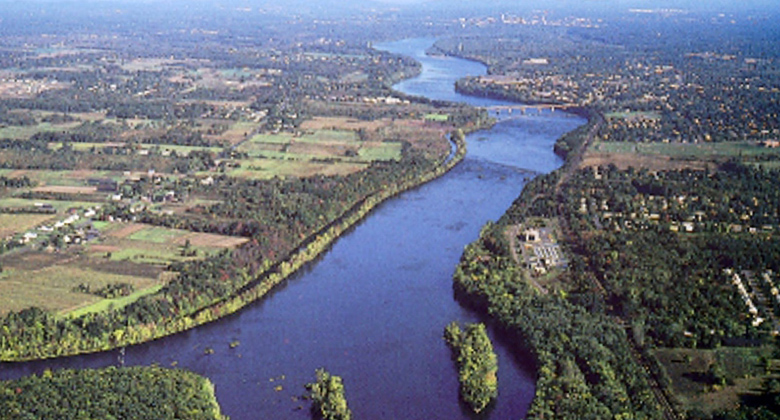 Between 1827 and 1829, over four hundred Irish immigrant laborers, some with their spouses and families, came to Windsor and Suffield, Connecticut to construct a canal bypassing the Connecticut River’s Enfield Rapids. This ambitious project came at the beginning of America’s canal building era, which began in 1825 and ended about 1845, when railroads made most canals obsolete. The Erie Canal from Albany to Buffalo is the mother of all American canals. The enthusiasm generated by the completion of the Erie resulted in a canal building boom around the nation.

The canal around the Enfield Rapids, which has come to be known as the Windsor Locks Canal, is unique in that it was one of the first canals designed to facilitate steamship transportation. The canal was designed with a dual purpose. In addition to improving navigation of the river, the canal was intended to serve as the backbone of a water-powered industrial center. There is a thirty-foot drop between the water level at the south end of the canal and the water level in the river. While a system of three locks was used to raise boats into the canal, the drop in water level provided potential energy to manufacturing establishments that sprung up between the canal and the river.

The colorful navigators and ambitious industrialists benefiting from the canal created a vibrant local economy. The shipping and industrial center became known as Windsor Locks and was incorporated with that name in 1854. While it is unquestioned that the Town of Windsor Locks owes its existence to the canal, it is also clear that the canal owes its existence to the unnatural confluence of two distinct ethnic and economic populations. On the one hand are the Anglo-American, Protestant and prosperous Hartford businessmen who conceived, promoted and financed the canal. On the other are the Irish, Catholic and dirt-poor immigrants whose labor brought the concept into reality. The story of the former is well documented. The story of the latter is almost unknown.

Local historian Jabez Haskell Hayden reported in 1900 that most of the immigrant laborers left the area after construction. Hayden’s observation appears likely, as the canal construction labor force was largely itinerant. About that same time, Dr. James Coogan’s own opinion on the subject was contained in his piece The Irish Element in the Windsor Towns which was included in Henry Stiles' work The Histories and Genealogies of Ancient Windsor, Henry R. Stiles, 1891. Coogan asserted,

“The digging of the canal at Windsor Locks attracted a number of Irishmen — and the names, Guinney, Moore, Burke., McMahon, Fitzgerald, Hayes, and Boyle, testify to their race and the land of their birth. Several of these became prominent residents — thus forming the nuclei of those Celtic homes which now number one third of the total within the boundaries of the old town of Windsor.”

Both Haskell Hayden’s and Coogan’s recollections are accurate. Most canal workers did leave the area after construction, but a few remained and raised families here. Public and private records confirm that Lawrence McMahon and Michael Guinang remained to perform ongoing repair and maintenance work on the canal and raised families here. Living descendants of both McMahon and Guinang have recently been identified.

For nearly two centuries, the laborers who built the canal were forgotten. In recent years, Windsor Locks citizens have come to understand that these laborers, who quite literally put the locks in Windsor Locks, should not be overlooked. On March 20, 2022 a permanent memorial to this group of Irish laborers will be erected in the Windsor Locks Canal State Park Lower Picnic Area.

For more visuals and Historical context, View these Slides prepared by Chris Kervick

Following the Dedication Service, the same group of Irish musicians supporting the ceremony will assemble back at Luppoleto Brewing (around 2PM) to play a set of Traditional Irish music. We are deeply honored to be part of this event.