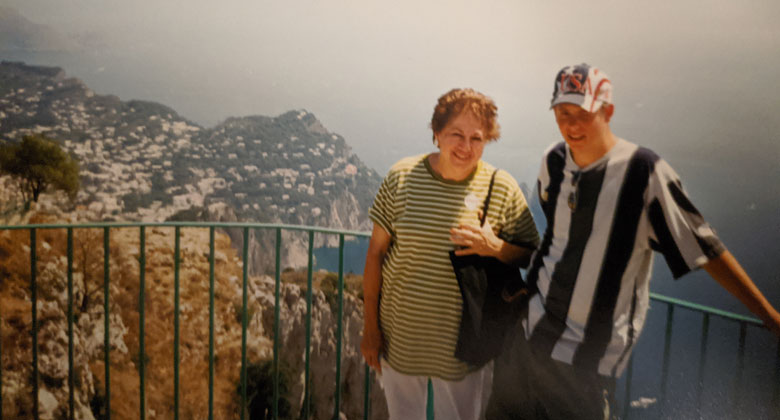 I cried today. I don’t cry much. Not because I don’t think it’s manly or socially acceptable. It just feels so out of control. I don’t like it. I view myself as someone who is usually in control.

I already said goodbye. Alzheimer’s stole her bombastic and glorious personality long ago. She was not Gramma anymore. When she was sharp; my friends and I would engage in spirited debates until all hours. Now she could scarcely tell whether or not she was supposed to recognize you; much less process who you were.

Frustration amplified many difficult situations. Facing rapid cognitive and physical decline with intermittent awareness is near the top of my list for worst nightmares.

Knowing, however briefly, who you were and who you are now instead: stunted, incoherent, trapped. This is a horrible fate.

The problem with all this struggle and pain is that we feel it more recently and it begins to eclipse the past. The joys. The multitude of fruitful, fun and inspiring conversations. The stimulating talks. The eye-opening adventures. These are the things that ought to be remembered. Yet the last few frustrating years of pain, anguish and disease have shoved them aside.

Yes, I had said goodbye. Not to her face but in my mind. My wife and I left after dinner one night and I felt it. We both felt it. It was confirmed with a look but without a word. She had been at the razors edge but now slipped into the abyss on the far side. The person we once knew as Cecelia Battisti (Kingston) was gone.

Sure, there were glimpses of the past. Some days were better than others. My mother, who served as her caretaker in the early days, would offer that familiar refrain: “There are good days and bad days.”; a reprise for anyone dealing with loved ones cursed by dementia. They seldom vanish into the void without moments of clarity – moments of hope that often make the pain of reality that much worse.

All of this is just my peculiar way of processing what happened this last weekend.

Last weekend, my grandmother, who was the last firm link to our Italian heritage, suffered a massive stroke. It was the kind of thing where you hope for the worst or the best but not the middle; over quick or false alarm. She doesn’t recognize anyone or speak much; the worst thing would be lasting pain and discomfort that she doesn’t understand and can’t explain.

Today I cried because - though I felt like I had said goodbye - I deeply regretted the fact I had never really said, “Thank You”. Sure, I had said it casually over the years but this woman brought me, and every one of her grandchildren, back to Italy when they turned 16. We all got a chance to tour Italy and visit the family in the very village where our Great Grandmother (Ada/ Noni) and Great Grandfather (Anthony / Popi) had met before setting out for America.

For this alone, I owe a huge debt of gratitude.

Cecelia also had a character flaw of the most pleasant kind. She was incredibly, unabashedly, enthusiastically positive about the future of her grandchildren. I am sure most grandparents are this way but she was convinced we would each change the world. She was persuasive enough that soon we each became certain of our grand destiny as a revolutionary inventor or entrepreneur or an influential public figure – she would have you aim for President. For at least a moment, we each shared a glimpse of that future she envisioned.

That feeling, that message – however briefly it lasted, left a an imprint on my life.

This transformative, albeit skewed, view of reality is much maligned. Critics say young people are snowflakes; feeling as though they are special and unique but so fragile that they cannot handle the harsh realities of life. I don’t think my Gramma believed we were better or special but she was confident that we were all much more capable than we gave ourselves credit for. This is transformational.

Like many people, I continue to struggle with feelings of inadequacy. But for Ce, we were never inadequate. We could all do whatever we set our minds to. Many people may tell you that, but her gift was making you believe it. She believed it.

So even though she likely cannot hear me, and likely cannot understand, I say thank you. I know that at least half of it is for me anyway – she does not need the gratitude, but I do feel an overwhelming need to express it.

You may wonder (if you somehow made it this far) why I am writing such a personal message; a personal non-beer message, on our brewery website. Well, my Gramma was a strong proponent of writing as a tool for processing your thoughts. I am not sure it works for everyone but it definitely seems to work for me. I am also writing this here because without Cecelia, there is no Luppoleto. Noni (my Great Grandmother) was a true powerhouse of hospitality but Ce was constantly, unabashedly, enthusiastically focused on encouraging us to take a shot.

And I have you, Gramma to thank.

Grazie di tutti. (Thank you for everything)

Mi mancherai. (I will miss you)

The photo was taken at an especially scenic overlook atop the Isle of Capri. This was only accessible by chair lift, which my grandmother (In her 60’s at the time) gracefully navigated in impressive fashion. And for those wondering about my USA hat, I was still basking in the glow of the Dream Team’s epic Olympic Run. My apologies.

Filed under #Our philosophy #Stories