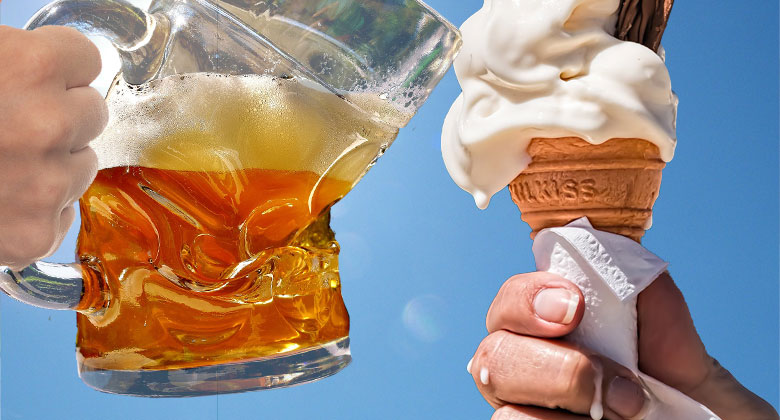 Unlike Diane, beer does not respond well to “…THE LIGHT, THE HEAT…(In your eyes)”. We haven’t actually hoisted up our boombox, Dobler-style, to really test how our beer responds to Peter Gabriel’s dulcid tones, but chemically speaking: light and heat are beer’s biggest enemies.

How does Heat Impact Beer

All the bad stuff that happens with beer (oxidation/staling, skunking, etc..) happens much faster when it’s warm.

Why should you care?

By warm we mean room temperature. And by faster we mean 4 times faster than in your fridge!

What you can do about it

Buy Direct from the Brewery - One of the reasons we selected the taproom model is so we could always keep your beer cold. The beer you drink at Luppoleto is cold crashed at the end of fermentation then stays cold until it hits your glass.

Bring a Cooler - There is a high nerd-quotiant to bringing a cooler to the brewery but, so what? Your beer will stay 4 times fresher than those chumps who let their beer warm to room temperature (or worse, sit in a hot car).

Buy beer from the refrigerated section - While it’s not any guarantee that beer in the cooler has been stored cool the whole time, when choosing between two 6-packs with the same packaging dates: always go cold!

Buy Local - Some brands, who are REALLY serious about freshness & quality, spend big bucks to transport their beer cold (ahem Sierra Nevada). But most breweries can’t afford to pay for refrigerated transportation. And a lot of beer stored at distributors is not actually stored cold. So the shorter distance that beer has to go to get to you the less time it likely sat in a warm truck or warm warehouse.

The Science of Heat Damage

The Arhenious equation establishes that there is generally a exponential relationship between heat and chemical reactions. So for every 10 degrees celsius, the speed of chemical reactions generally doubles. That means all the bad staling reactions will happen twice as fast at 50F/10C as they do at 32F/0C and 4 times faster at 68F/20C. Increasing temperature increases the number of collisions that occur and therefore the number of “successful collisions”. Successful here means a chemical change has taken place but for flavor stability, that is NOT success. That generally means oxygen reacted with another molecule to produce an unpleasant compound.

Now…we are not scientists. There are practical limits to applying this rule too generally - as I’m sure many REAL scientists will announce in our Inbox. However, our simplistic understanding still holds: generally speaking, chemical reactions happen A LOT faster at “warm” temperatures. And 68F is actually pretty warm; relatively speaking!