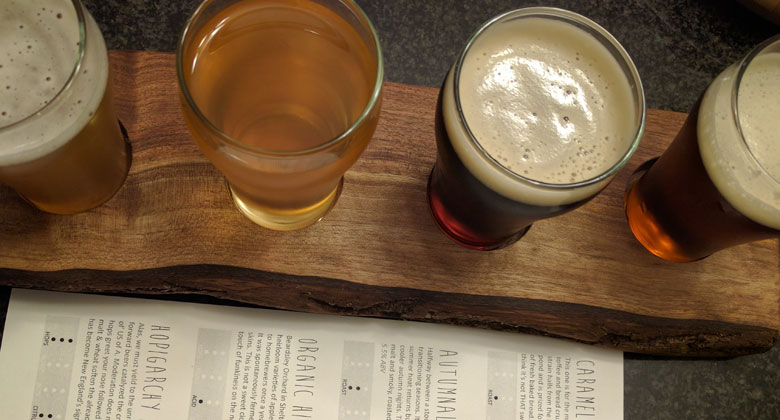 Boldly Aromatic Crisp Inspired & Obsessive. These are the guideposts of our brewing philosophy. And BACIO means kiss in Italian. And there is nothing cooler than acronyms, right? What? I’m being told acronyms are memorable but not cool. AH. That makes more sense.

Boldly Aromatic beers are memorable, remarkable & passionately pursued. Hop aroma is the single biggest driver of the IPA market. Brewers are obsessed with wringing every bit of tropical & citrus aroma from their hops and drinkers are equally zealous about getting the freshest brews possible to maximize this wonderful aroma. Delivering an enticing aroma is at the core of our recipe strategy. In our view, all great beer has a wonderful, inviting aroma and we are willing to compromise (slightly) on appearance in order to provide the best possible aromatics.

We think all beer should have an edge. Crisp beers are refreshing, drinkable and accessible. We will favor the refreshing characteristics of moderate alcohol content, generally low residual sweetness (dry), strong minerality, firm bitterness, and consistent moderate carbonation which invite another sip and then another pour. Sweet Double IPA’s have their place and big syrupy stouts make a great sipping beverage (or dessert) but these won’t be fixtures in our regular lineup. We want folks to be able to enjoy more than one per visit.

Inspired ales have a story; they’re a reflection of the growing season, of a favorite cocktail or dessert or prompted by an element of the centuries old brewing tradition. We will connect our customers with the story behind their beer. We will draw inspiration from the seasons, from local producers and farmers and from historical styles.

At its heart, beer is an agricultural product and we will draw our inspiration from the local farmers; incorporating fresh, local ingredients whenever feasible. The principle ingredients in beer are malted grain - typically barley and/or wheat - and hops. Both have historical roots in New England but only in the last 5 years that we have seen the return of hop and barley production to Connecticut.

Hops were certainly planted by New England settlers but the conditions weren’t right for them to thrive here. By the mid-1800s, most commercial hop farming had shifted West. Now, nearly half the world’s hops are grown in the Pacific Northwest. With the development of hearty hop hybrids and modern farming practices, hop farming is making a triumphant return to Connecticut. Smokedown Farms in Sharon, Connecticut has a 9 acre hopyard and Pioneer Hops of Connecticut is growing 5.5 acres at South Farms in Morris. There is even a non-profit Connecticut Hop Growers Association whose charter is to, “promote the resurgence of CT-grown hops, but also act as a meeting place for hop farmers and prospective hop farmers to come together, share ideas, and learn from one another.” We recently learned of a co-op with a mobile hop-picker that can be brought from farm to farm to support small growers who can’t afford this essential but expensive piece of equipment!

Brewing grains have been grown in New England for centuries but there weren’t any local sources for malted grain until very recently. There are now at least 2 maltsters in New England. And this is just the beginning, the Connecticut legislature further encouraged Connecticut Grown Beers by requiring any brewery opening under the Farm Brewery License to source at least 50% of its hops, barley cereal grains, honey, flowers, or other fermentable grown or malted from within the state!

Part of this craft beer revolution is driven by the desire to eat & drink as locally as possible and to forge meaningful connections with the folks who grow & make the things you consume. It is now it is possible to make a no-compromises, 100% Connecticut Grown beer and we think that’s awesome! We will use Connecticut grown ingredients as often as possible for its sustainability, reduced eco-logical impact (less transportation) and to remain true to the agricultural roots of brewing as a method of preserving the harvest. Ultimately, we want to deliver a uniquely local product with a great story!

We stand, as they say, on the shoulders of giants. There are breweries who have been operating since the 1600s and we are not so bold as to think we are remotely close to joining their ranks. However, we will draw inspiration from old styles and add a twist to make them uniquely ours. There are many intersting styles with intriquing lore and mythology around their inception that are fun to brew just for a chance to share those tales with you all.

We will be obsessive about quality and service but first and foremost, freshness matters!

We will produce high quality beer from day one but will strive to rise to a truly world class level. Unlike most nano-breweries, we will establish a formal QA/QC program and will be vigilant about delivering the best service experience. That means regular cleaning of draft lines, proper service temperature, style appropriate glassware free of residue or odors and proper pours with at least an inch of foam on top – not just filled to the brim.

Hospitality, hospitality, hospitality! We will raise the bar on what brewpub guests expect from service. Our staff will be extremely knowledgeable about our beer but will also maintain a dialog with the guests and establish a meaningful connection – not some scripted interaction.

Filed under #Our philosophy