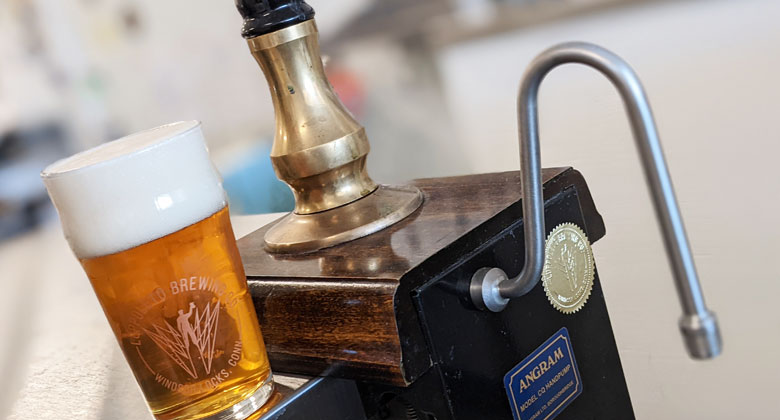 Last year, we took too long. There was just too much time between the Community Hop harvest and tapping the first beer which incorporated these ultra local hop cones. This year, we carved out space in the brewing schedule to ensure Putting Down Roots got into the tanks – and into your glasses – much sooner!

Since this year’s hop harvest was so abundant, we decided to showcase our Community Growers hops in another locally inspired, 100% Thrall Malt beer: Mantello. Long before they began grown and malting barley, wheat, spelt and rye, the Thrall’s grew Shade Tobacco which was highly prized as a the outer wrapper for fine cigars. Mantello means wrapper in Italian which is a nod to Thrall’s Tobacco farming heritage featuring barley & spelt grown and malted by the Thralls less than 5 miles down the road in Windsor.

We are introducing Community Hops to this beer in the cask tradition. Beer is pulled from the fermenter before it is finished (i.e. there is still unfermented sugar), dosed with hops, a small amount of clarifying agent (a vegan-friendly form of gelatin), sealed up and left to carbonate naturally. Instead of dry-hopping with commercial hops we used whole-cone Community Hops which we dried in small batches.

We will be pouring a different cask each weekend over the next few weeks.

There are two main schools of traditional English ale service: gravity pour and hand pump. We use a traditional Angram Beer Engine, which is a hand-pump that draws beer into a cylinder and pushes it through a narrow spout to inject a lot of air into the beer. Since air is mostly nitrogen, this will have the smooth and creamy characteristics often associated with Guinness (poured via nitrogen). In fact, nitro-poured beers were created to mimic the characteristics of beer served on hand pump!

The catch, is that as soon as these casks are tapped, they are exposed to the air and so we have to finish them THAT day. And there is no way to package this beer for offsite consumption. So if you are interested in trying one of the most ultra-local beers around - where all the ingredients are grown and processed within 8-10 miles of the brewery - then mark your calendars and join us for a Pub Style Mantello, or for a Pub Style PDR (Putting Down Roots), any of these days…

We can’t wait to share the bounty of this year’s harvest with you!